We are currently investigating an issue that is causing intermittent "504 Gateway Time-out" errors in the catalogue.

Sir Miles Warren is one of Christchurch’s foremost architects. To mark his 80th birthday, his work was the basis of an exhibition at the Christchurch Art Gallery. Alongside his internationally-recognised architectural work, the exhibition revealed his skills as a landscape designer and painter of watercolours.

In an interview on Radio New Zealand, Sir Miles described the venture as “a bit like an architect standing with his architectural pants down, with everything exposed”. The exhibition represents 45 years and “hundreds” of creative people, he said.

Sir Miles began his working life in Christchurch with Cecil Wood, and initially studied architecture via correspondence at the Christchurch Atelier. He moved to Auckland to complete his studies, then worked in London before returning to New Zealand.

It was during this time that his watercolour technique was honed as one of the many tools in the architect’s working toolbox. Sir Miles continued to paint watercolours throughout his career. Sir Miles is also hailed as a landscape designer and his work at Ohinetahi, at the head of Lyttelton Harbour, is open to the public for viewing each year.

Sir Miles was made a CBE in 1974, knighted in 1985 and was awarded the Order of New Zealand in 1995. In 2001 he was awarded an Honorary Doctorate from the University of Auckland, and in 2003 he was given the Icon award by the Arts Foundation of New Zealand.

Sir Miles Warren started his design practice in 1955, beginning with the design of two houses in Timaru in that year. In 1956 he designed the Dorset Street flats in Christchurch, and in 1958 he began a long and successful partnership with Maurice Mahoney, winning a large contract to build the Dental Training School. The practice became known as Warren and Mahoney. The pair’s work is regarded as the birth of a Christchurch style of architecture.

Sir Miles retired from the practice in 1995. In the wake of the 2010 and 2011 earthquakes he has been active in discussions about the future of Christchurch buildings, in particular the Town Hall, as a member of the Keep Our Town Hall group. 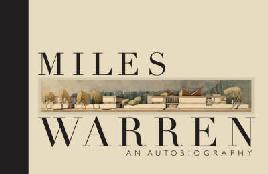 Miles: A Life in Architecture
Celebrating the achievements of leading New Zealand architect Sir Miles Warren. Christchurch Art Gallery, 10 June 2010.
Lois Cairns, Town Hall Now Likely to be Saved; A $127.5m Council Decision
The Press, Oct 31, 2012. Use at a library or enter your library card & password / PIN.
Warren and Mahoney houses
From www.christchurchmodern.co.nz
The Warren Trust
Sir Miles Warren established the Warren Architects’ Education Charitable Trust (The Warren Trust) as a vehicle to promote architectural education to both the architectural profession and the wider public in New Zealand.