Richard Hadlee is one of the twelve Canterbury Heroes - important local figures who have been acknowledged in a set of bronze busts.

Perhaps New Zealand’s most famous cricketer, Sir Richard Hadlee was the first bowler in the history of test cricket to take more than 400 test wickets.

His ability to swing the ball, as well as devastating speed, made him New Zealand’s main strike bowler, and in just 25 tests he took 100 wickets. He was also a left-hand middle-order batsman, scoring more than 3000 runs.

Richard Hadlee was born on 3 July 1951, in St Albans to Walter and Lilla Hadlee. His older brothers, Barry and Dayle, also represented New Zealand cricket — the brothers played together at the World Cup in 1975. Hadlee has said he was inspired by Canterbury bowler Dick Motz.

Nicknamed ‘Paddles’, for his large feet, Hadlee’s cricketing career was built during the 1970s when, largely due to his bowling skill, New Zealand gained major wins against India (1976), Australia (1977) and England (1978). His best bowling figures were 9 for 52 against Australia at the Gabba, Brisbane, Australia in 1985-86. At the end of his career he had taken 431 test wickets.

Photos of the Richard Hadlee bust 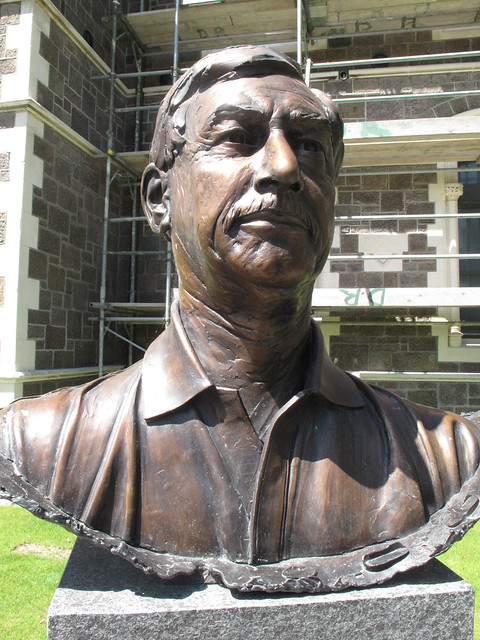