Charles Luney is one of the Canterbury Heroes - a set of twelve bronze busts of important local figures. 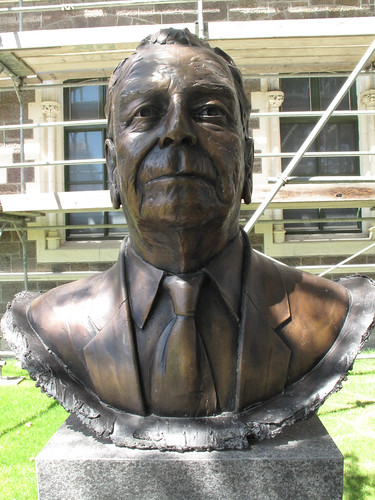 Charles Luney’s plaque reads:
"Master builder of many of the foremost buildings of Christchurch, upright and respected contractor and employer for the 75 years of his working life".

Master builder Charles Luney and his company constructed some of Christchurch’s most notable buildings, including the Christchurch Town Hall and both Christchurch and Princess Margaret Hospitals.

His traditional values of hard work, loyalty and thrift were well-known throughout the industry and he was still a hands-on presence on his building projects in his 90s.

Charles Luney was born in Lyttelton on 28 June, 1905. He attended Christchurch Boys’ High School, completed a joinery apprenticeship, then started his own firm in 1926. He built garages for the rapidly growing number of car owners and set up his building yard on Kilmore Street opposite the site of the current Town Hall.

His first major project was the Radiant Hall, financed by Thomas Edmonds, which was completed in 1930. His firm, C. S. Luney Ltd, went on to build Princess Margaret Hospital, the Reserve Bank, National Bank and Government Life buildings, the Christchurch Central Library, the Park Royal Hotel and Christchurch Public Hospital. His favourite building and his most prestigious work was the Christchurch Town Hall which was opened in 1972.

Awarded the Queen’s Service medal in 1982, Luney became a Companion of the New Zealand Order of Merit.