People have lived and gathered food in the estuary area for over 600 years.

The estuary provided vital access to a network of waterways stretching from Waihora (Lake Ellesmere) to the Kowai River and the estuary channel provided an opening to the fishing grounds of Te Kaikai a Waro (Pegasus Bay). 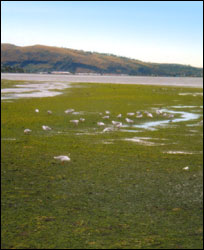 The first settlers were the Waitaha iwi who lived in two main kāika around the estuary: Raekura and Te Kai o Te Karoro. They built whare from local harakeke, raupō and trees.

Later in the 1500s, the Ngāti Māmoe iwi had a settlement near the estuary on Tauhinu Korokio, today’s Mt Pleasant. About one hundred years after this, Ngāi Tahu under chief Tūrākautahi, established a pā north of the Waimakariri, called Kaiapoi Pā. While Ngāi Tahu did not live alongside the estuary itself, they visited and used the area as a mahinga kai in a similar way to their predecessors.

The estuary was rich with tuna (eels), kanakana (lamprey), inaka (adult whitebait), pātiki (flounder) and pipi. Kōmara and aruhe (edible fern root) were grown in the sandy soils at the mouth of the Ōtākaro. Mānuka weirs were built around the mouth of the river during the eel migrations and pātiki were abundant in the mudflats across the middle of the estuary, an area called Waipātiki (flounder water).

The estuary was part of a large network of food resources and trading between families. Such trading helped maintain tribal connections throughout the South Island.