Reading a book about a garden is an unusual event for me. For a start I don't like gardening, and I am more of a fiction reader, however Another Green World Linn Botanic Gardens: Encounters with a Scottish Arcadia is as much about the two characters who created this garden as it is about the plants.

Linn Botanical Gardens are located on the shores of Loch Long in Scotland and is home for over 4,000 species of plants. Warmed by the Gulf Stream the valley has its own microclimate.

These shores were once home to summer residences for Glasgow’s wealthy elite. Now they’re known for the ominous, whale-black nuclear submarines which slide from Faslane on Gare Loch to Loch Long, where their warheads are stored in the mountainside. Their proximity, and that of jellyfish and conger eels, made my daily swims in the loch somewhat intimidating. 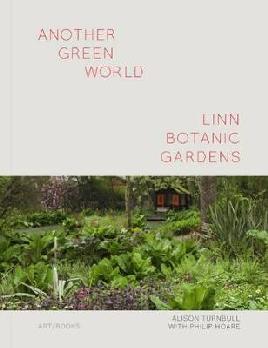 Linn Gardens was established by Jim Taggart in 1971. Jim belies his 80 plus years, his face is ageless, (perhaps a byproduct of the warm damp air), and you get the sense that he will never leave. His son Jamie took on the task of searching the world for rare species, and between the two of them they have created a place that looks untamed and wild, yet their combined knowledge of science, botany and do it yourself attitude hides an environment that is anything but random.

Jim's passion for his garden is only matched by his involvement in the Campaign for Nuclear Disarmament and protests against the submarine base and military facilities that loom over the loch. You get the sense that he is a man of strong but quietly held beliefs, a loner - but intrinsically connected to the plight of the world.

The author Philip Hoare has a style of writing that is as gentle as the guardians of this garden, both lyrical and moving. Each piece of writing is followed by Alison Turnbull's photographs and these add extra meaning to the words and are a story in themselves. I particularly liked the words and photographs describing another aspect of this place - Linn villa, built in 1860.

Jamie leads us past a quince tree and pushes open an unlocked and heavy grey oak door. Inside, the house appears to have lain untoached for decades. A patina of archival dust lies on every surface: even the walls seem furry with it. Portraits of ancestors and photographs of family hang gothically; alcoves hold urns; the furniture has seen better days, and may yet see better ones... A blue computer screeen glows anachronistically in a corner. The contemporary world is not ignored at Linn; it is just subsumed into another green world.

This is a book to savour.  Now all I need to do is save up so I can make a visit.