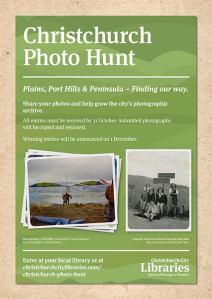 Plains, Port Hills & Peninsula – Finding our way was the theme for 2017.

This year we had some excellent individual photographs and collections submitted telling wonderful stories of people, family and Christchurch. Thank you so much for sharing your memories and contributing to our photographic history.

This year’s judges were Sarah Snelling the Digital Curation Librarian and Masha Oliver, Information Librarian at Central Manchester Library joined by Jacqui Stewart from the Kete Christchurch Team. They met on 27 November to decide on the winners in the categories of Places - Your landmarks in time, Your People – How we lived, and an overall winner.

Photographs date from 1913 to October 2017 and it has been a great to receive so many photographs from the 1960s, 70s and 1980s. Of note is the collection of photographs from Cynthia Roberts. These photos document women involved in the Christchurch Women’s Resource Centre in the 1970s.

The judges noted that this year the photos reflected Christchurch’s social history, depicting everything from anti-nuclear awareness and anti-mining protesting to Cantabrians at work and play. We also see buildings and landscapes that have been lost due to development and earthquakes.

Several entries are recent photographs beautifully highlighting the magnificent landscape we live in.

This image was awarded the overall winner for multiple reasons. One of the judges commented that so much was being told by the photograph it has an almost illustrative quality to it. A strong composition is balanced by the people in the foreground.  This photograph was taken in 1980 and shows Māori, Pākehā, a family group and people of different age groups. The woman with the pram and suitcase fits in with the “finding our way” theme. The image shows people in places and a sense of community spirit.

This photograph is part of a wider collection that Cynthia submitted focusing on people in the 1970s and 1980s. Our digital heritage collection has really been enhanced by Cynthia’s photographs.

Doug’s image is part of a wider collection of twelve photographs taken by his mother in the late 1940s. The collection shows pictures of a group of friends that caught the daily train from Rangiora to Papanui High School and went tramping and socialised together, showing what young people did in their leisure time.

The judges fell in love with the images of young women enjoying themselves and living life in post WWII Christchurch.

It was noted that this photograph has a feeling of a modern selfie and that really not much changes in 69 years. Teenagers still hang out and take photos of themselves. It was also commented that the clothing was not the active wear and shoes we wear now but everyday clothes, maybe even school uniform.

This collection continued the story of a photograph on Kete Christchurch that we published as a post card for this year’s Photo Hunt. Doug’s collection has told more of that story.

Making a Yogi Bear Snowman in the evening, 1976. June Hunt.

June Hunt’s photograph of the snowman was highly commended as this photo and her other submissions show her story and everyday family life in 1970s Christchurch. The excitement of the first snow, the clothes people wore and what people did in their leisure time.

This photograph was judged as highly commended as it tells such a lot about what was happening in post-WWI New Zealand. We can see what men wore to work - craftsmen doing a trade that may have been in its decline. The depiction of stonemasons working on stone to build a church when so many of our stone churches has gone after the earthquakes is also significant.

This photograph is one of the oldest we received this year. It shows Fredrick Wilson the leader of the Stanmore Brass band in 1913.  The Wilson family ran the tearooms at the Sign of the Bellbird and Fredrick also helped Harry Ell build the walking tracks.

The image shows what people did in their leisure time and a bygone era when nearly every suburb had a brass band.

Charlotte is 18 years old and dressed in her boyfriend’s clothes riding his motorbike that she liked riding fast. The photograph was awarded a highly commended. It shows an adventurous young woman who had a long life in Christchurch. She travelled throughout Canterbury on the back of her boyfriend’s bike, “finding their way”.

This photograph continues the theme of many of this year’s submissions, strong women enjoying life in Christchurch.

The images in this category included landscapes, images of Banks Peninsula, interiors and buildings.

This image was chosen for several reasons. It shows a crowd at a rugby game at Lancaster Park - they may be leaving after a game. Socially it reminds us of what many people did regularly on a Saturday afternoon, what people wore and what people did in their leisure time.

A judge also commented that it feels like the crowd escapes the photo.

This photograph was taken in 1979. We have very few photos of the city at this time and the photograph shows a lost city scape, specifically the east side of Manchester Street between Allen and Eaton Streets.

An image of iconic Sumner at sunset. Taken in 2009 the landscape was dramatically altered by the earthquakes.

This a unique image as it shows the interior of a shop in 1960, and it shows a display introducing Old Spice.

Merle’s photographs taken while out on Banks Peninsula with her walking group have added greatly to our collection. She highlights the varied landscape found on Banks Peninsula, from the coast to the rugged hills.

The Totara tree looks like a sign pointing in several ways tying in nicely with the “finding our way” theme.

We welcome submissions of photos, information and stories to Kete Christchurch at any time.