Dungeons and Dragons has experienced a surge in popularity in recent years. Live shows and podcasts have attracted huge international followings and been transformed into comics, boardgames, and official Dungeons and Dragons (D&D) content. Locally in Christchurch, we have the live show Dungeons and Comedians that frequently sells out. There’s a Rick and Morty D&D comic series, a Stranger Things D&D Starter Set, and even kid's books. Libraries across New Zealand are starting D&D groups for kids and teens and they’re booked out. Dungeons and Dragons is here and it’s popular.

So if your friends or family have been asking you to play, read on! Dungeons and Dragons is a great way to socialise with friends and family and can be a way of tapping into your creative or dramatic side.

D&D has a lot of rules and can seem quite overwhelming at times, but it’s also important to remember that it’s meant to be fun. You can pick and choose which rules work for you, and what’s possible in your world. Do you want to count every arrow you’ve shot so you know when you’ve run out because you like the tension and the challenge of a good battle? Or maybe you want to defy physics, ignore the dice, and get swallowed by a dragon whole only to slash your way out of its belly because it’ll be hilarious?

An open mind and an open heart are the first tools to bring to the table.

If you’re jumping into this brand new, welcome! Here are some terms to help you get up to speed.

Rules – Games have a set of rules often based on dice rolls that determine how successful your actions are. Some TTRPGs are rules heavy meaning there are a lot of them – like Dungeons and Dragons – and others are rules light – meaning there are very few rules. Rules light games are quicker and easier to pick up and learn. They’re often more imaginative and rely on collaborative storytelling but there’s no reason why you can’t bring that vibe into a rules heavy game!

Game Master (GM) or Dungeon Master (DM)– A participant in the game that takes responsibility for running the game. They are the Storyteller use a set of rules to decide what the outcome is for the players’ actions.

Party– The term given to the group of players acting as the adventurers in the game.

Adventure– An adventure is a pre-written story that the Dungeon Master uses alongside the rulebooks. The time is takes to complete an adventure varies, but often you can find an approximate run time listed on adventures produced by the community. Dungeons and Dragons produces official adventure books that are very long and are designed to take your characters from Level 1 all the way up to the top. You can expect these adventure books to take hundreds of hours to complete.

Campaign – Often used in conjunction with adventure to designate an adventure that will played over many sessions for an extensive period of time. See, the official Dungeons and Dragons adventure books.

1d6 – Abbreviations like this are common throughout D&D. It translates to 1 die 6-sided – the standard die we’re all familiar with.  A 1d20 is 1 dice with 20 sides. Roll 2d6 would mean roll two six-sided die.
5e/5th Edition – D&D has been around for a long time and is gone through several revisions. The current edition being supported is 5th edition. The library holds earlier editions. 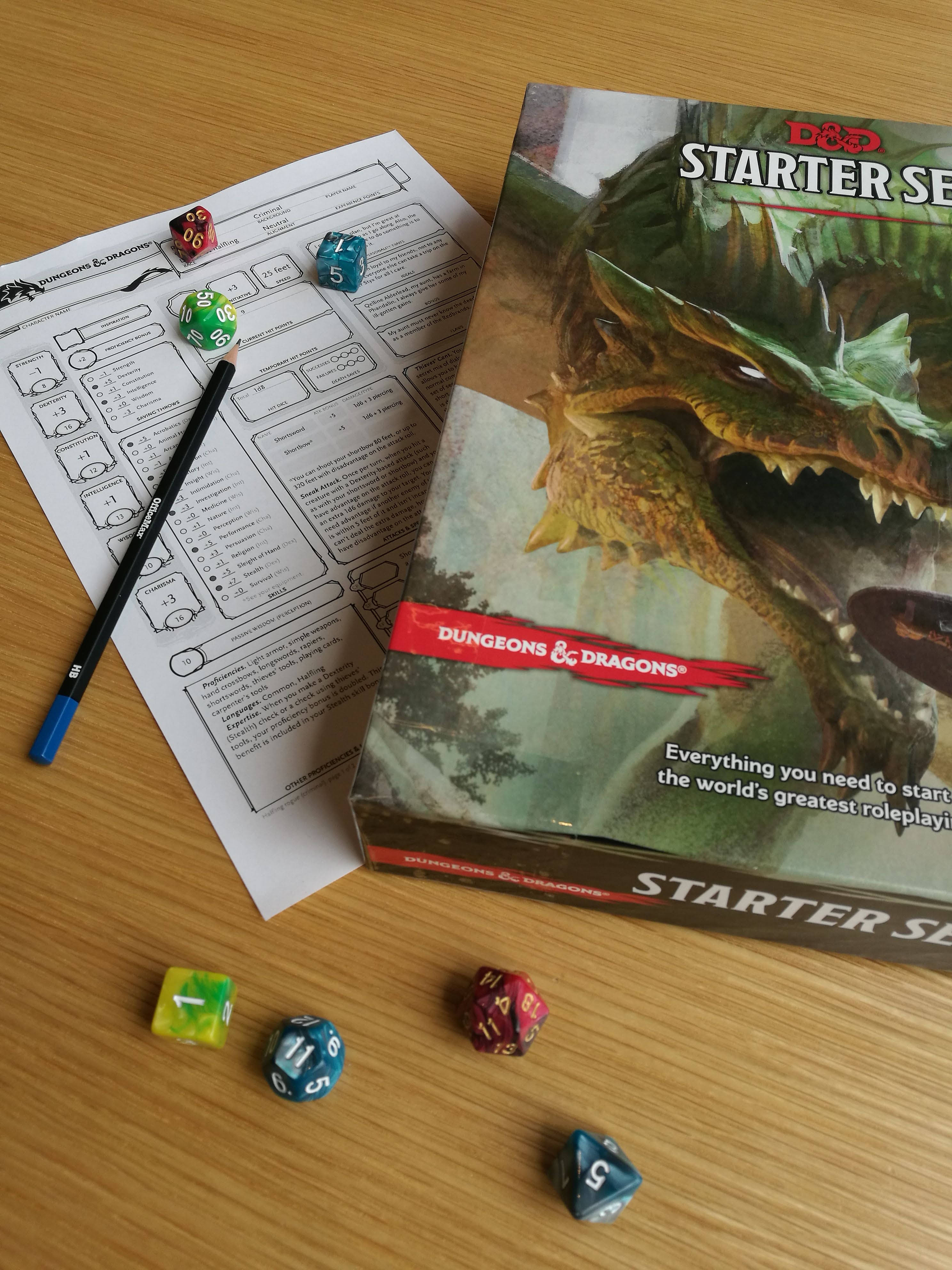 If you’re desperate to learn to play D&D while in lockdown, you’re in luck! Dungeons and Dragons have released some of their previously paid-for content for free. You can now download all the material from the Starter Set which is designed as a first introduction to D&D:

You can download the adventure through Roll20 or Fantasy Grounds; these are virtual tabletops and are great for a group of more experienced players who aren’t in the same Bubble. But if you’re just starting out, you can read the adventure on D&D Beyond which is the official digital platform for Dungeons and Dragons.

We also have the Starter Set at Tūranga for use in the library and plenty of big tables and study rooms for groups to play.

While the D&D website has some content for free online, you can borrow the full set of rules and information from the library!

I’ll be the first to tell you that the rules books can be pretty overwhelming, especially for kids. The Young Adventurers Guides are designed with young, new players in mind! They introduce the big elements of D&D – Monsters & Creatures, Wizards & Spells, Dungeons & Tombs, and Warriors & Weapons – and capture the spirit of playing D&D. The gorgeous illustrations, maps, and insightful text will tap into kids’ imaginations.

D&D can be fun for all ages and that can mean, sometimes, closing the rule book and putting the dice down. It can allow kids to be creative – drawing and creating stories around their characters, or creating a whole world and story that their family and friends can play in. The game encourages using problem-solving skills and working together as a team. There’s even maths involved when you’re adding up dice rolls or subtracting from your hit points. It can develop confidence and leadership in young people – whether they’re the DM or a player, there’s a chance for their voice to be heard and to contribute meaningfully to a team.

What you need to play

Some people play with gridded battlemaps and mini figurines (minis) to represent their characters and the monsters. These are useful if you want to be strict on how distance and whether you could’ve made that shot or outran the monster. You can use graph paper or a whiteboard as a substitute for a battlemap. When my friends and I play, we’ve used gummy bears as minis!

If you’ve got a printer, look out for printable/paper minis online. Printable Heroes has free paper minis that you can use when you play.

Being the Dungeon Master

Someone will need to be the Dungeon Master. It’s the most important role! Your job is to be the storyteller and the rule enforcer/rule ignore-er. You’re like a referee but way better. Playing from an already made adventure is the best way to start. What you’ll find in an adventure is a story, settings, and things that will or could happen to the players. This does mean you may need to remember a lot of rules! It’s useful to read ahead, take notes, and write down rules that you’ll need to remember (or disregard!) later.

If the rulebooks have you scratching your head, do not fear! There’s plenty of resources available to help you understand all of those rules.

Listen or watch someone else play

Podcasts and live shows are a brilliant way to see the rules in action and get a feel for how the game plays. If you’re watching/listening for younger players, beware there may be mature language.

There are various YouTube channels dedicated to explaining how to play for players and Dungeon Masters. Here’s just a few:

If in doubt, google it. Because D&D has been around for decades, there’s lots of support out there. You can google a rule you’re stuck with and likely find 5 Reddit threads all answering the same question you have!

Dungeons and Dragons produce a cardgame called ‘Dungeon Mayhem’. It’s a wonderful family game that captures the spirit of D&D while introducing kids to basic concepts of the game like character classes, class-specific abilities, and dealing and receiving damage. It’s quick to play and there’s plenty of expansions to keep the game fresh. Battle it out and see who in your family is the best adventurer!

Dungeons and Dragons at your library

Dungeon Delvers
Be the hero in a tabletop role-playing campaign where everything rests on your roll of the dice!
Free, but bookings essential
Shirley Library – Ages 12–18

Christchurch City Libraries offers 3D printing services. You could use the 3D printer to print minis of your characters, monsters, or terrain.

Tūranga has a Production Studio with equipment such as a laser cutter, sewing machines, vinyl/craft cutter, and embroidery machine. This is the place to go if you’re looking to laser cut a personalised box for your dice, sew a dice bag, or make D&D crafts for you and your party. Check out the classes and Open Creative Times offered throughout the year.

You can find the Dungeons & Dragons Starter Set in the games cabinet on Hapori | Community, Level 1 at Tūranga. It is free to use anywhere within the library.

Are you a young person interested in Dungeons & Dragons? Or a parent who has a fondness for this fantasy role-playing game and want to pass the pleasure onto your children? Check out CCL's selection of D&D related fiction titles and game guides aimed at younger readers. For toddlers, tweens or teens - from picture books, to comics and chapter books (including eBooks). A Christchurch City Libraries List.

This illustrated guide transports new players to the magical world of Dungeons & Dragons. Featuring easy-to-follow and entertaining explanations of how spells are created and used in the game, along with original illustrations of the game's essential magical characters, this book shines a spotlight on the mystical side of D&D.

Dungeons and Dragons in your community

Christchurch has a few game-stores stocking Dungeons and Dragons books and other merchandise. Some even run games that you can join!

There are even Facebook groups where you can meet other D&D players, find groups to join, share what you’ve made, or ask for advice. The biggest is Dungeons and Dragons New Zealand.