Waitangi Day marks the most significant moment in this country’s history — when representatives of the British Crown and Māori Chiefs signed the Treaty of Waitangi on 6 February 1840 at Waitangi in the Bay of Islands, Northland. The Treaty formed the foundation of a new nation and saw New Zealand become part of the British Empire.

For nearly 100 years, the signing of the treaty was not commemorated. Instead, most celebrations of New Zealand’s founding as a colony were marked on 29 January, the date on which William Hobson arrived in the Bay of Islands.

In 1932, Governor-General Lord Bledisloe and his wife purchased and gifted to the nation the run-down house of James Busby, where the Treaty was signed. It was restored and the first Waitangi Day was celebrated in 1934. In 1940, the Waitangi Treaty House and grounds featured prominently in the Centennial celebrations and annual celebrations were held there during the 1950s.

The Waitangi Day Act was passed in 1960, which stated that 6 February be set aside to be celebrated throughout the country as a national day of thanksgiving to honour the signing of the Treaty of Waitangi. In 1974, the day was made a public holiday and renamed New Zealand Day but reverted to Waitangi Day in 1976 (see the Waitangi Day Act 1976).

Celebrations at Waitangi and elsewhere

In Waitangi at dawn, the Royal New Zealand Navy raises the New Zealand Flag, Union Jack and White Ensign on the Flagstaff in the Treaty House grounds. Ceremonies during the day generally include a church service and cultural displays such as dance and song. Several waka and a navy ship also re-enact the calling ashore of Governor Hobson to sign the treaty.

Elsewhere in New Zealand, various communities have been celebrating Waitangi Day in a variety of ways including public concerts and festivals. Some marae use the day as an open day and an educational experience for their local communities, giving them the opportunity to experience Māori culture and protocol. In London, which has one of the largest New Zealand expatriate populations, a tradition has arisen in recent years to celebrate Waitangi Day. On the closest Saturday to 6 February, Kiwis participate in a pub crawl using the London Underground’s Circle Line. At 4pm, a large-scale haka is performed at Westminster as Big Ben marks the hour. 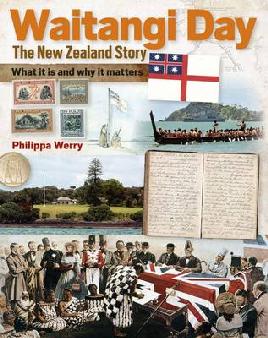 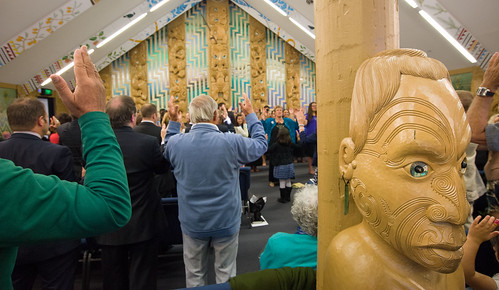