Picture books are frequently requested by teachers and parents as a way to introduce children to mathematical concepts. These maths books are recommended for children aged four to eight.

The very hungry caterpillar Eric Carle
Follows the progress of a hungry little caterpillar as he eats his way through a varied and very large quantity of food.
Countablock Christopher Franceschelli
Teaches the numbers from one to one hundred by showing how a certain number of objects can become something else, from one acorn growing into an oak tree to one hundred puzzle pieces becoming one large puzzle. Fantastic cut out pages.
1 2 3, Little Donkey Rindert Kromhout
Little Donkey and Bobby want some treats and count everyday things as they try to get them.
Have you seen my dragon? Steve Light
A small boy has lost his dragon in the city! Can you help him find him? And while you're looking, count the objects along the way. 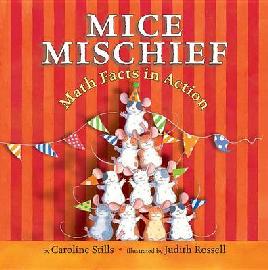 The follow the line series Laura Ljungkvist
Invites the reader to visit a wide variety of places and count different objects found in each, from fire hydrants in a big city in the morning, through starfish in the ocean during the day, to babies sleeping in a country village at night.
100 things Masayuki Sebe
Counting and activity book, with puzzles involving mice, cats, moles, sheep, birds, berries, fish, elephants, children, ants, houses and cars. Introduces counting by tens.
The 500 hats of Bartholomew Cubbins Dr. Seuss
Bartholomew really wants to take off his hat to the King of Didd … but how? And how many hats will he end up with?
Mice mischief Caroline Stills
Ten mice wake and get their home ready for the circus. As they clean and play, these colorful and acrobatic creatures demonstrate how the numbers from 1 to 9 can add up to 10. A simple introduction to addition. 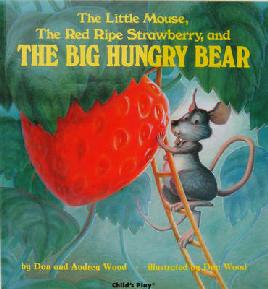 The doorbell rang Pat Hutchins
Each time the doorbell rings, there are more people who have come to share Ma’s wonderful cookies.
The lion’s share Matt McElligot
Ant is honoured to receive an invitation to lion’s annual dinner party, but is shocked when the other guests behave rudely and then accuse her of thinking only of herself.
The little mouse, the red ripe strawberry and the big hungry bear Audrey and Don Wood
Little Mouse worries that the big, hungry bear will take his freshly picked, ripe, red strawberry for himself. There’s only one solution: to share it! 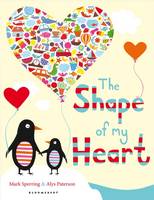 The secret birthday message Eric Carle
By following the instructions in the geometrically coded message, Tim finds his birthday present.
The wing on a flea Ed Emberley
Simple rhyming text and illustrations guide the reader to see triangles, rectangles, and circles in everyday things.
Seeing symmetry Loreen Leedy
An assortment of dozens of diverse and colorful examples from quilts to kites to cupcakes invites the reader to discover both line and rotational symmetry.
Shapes PatrickGeorge
Go on a journey of shapes with this bright and bold book. Shapes are emphasised with a transparent acetate sheet that flips between pictures to change their meaning.
Square cat Elizabeth Schoonmaker
A square cat struggles in a round world but realises the benefits of her particular shape.
The shape of my heart Mark Sperring
Colourful pages with lots of different shapes to spot and a warm tone. 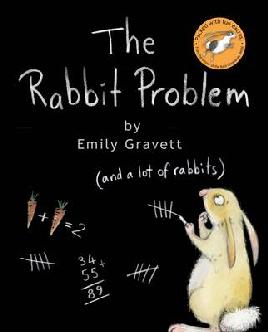 The rabbit problem Emily Gravett
We follow one pair of rabbits through a year as their brood increases. Based on the Fibonacci sequence and also a great starter for multiplication.
The doorbell rang Pat Hutchins
Each time the doorbell rings, there are more people who have come to share Ma’s wonderful cookies.
The lion’s share Matt McElligot
Ant is honoured to receive an invitation to lion’s annual dinner party, but is shocked when the other guests behave rudely and then accuse her of thinking only of herself.

Me first! Michael Escoffier
One little duck always has to be first, to the detriment of the rest of the family.
The first day of winter Denise Fleming
A snowman comes alive as the child building it adds pieces during the first ten days of winter. The days are numbered in an ordinal manner.
Ten little caterpillars Bill Martin, Jr.
Nine caterpillars journey across the garden but the tenth undergoes a metamorphosis. 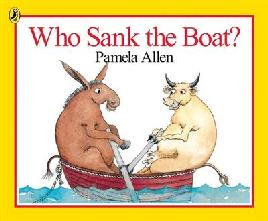 Watch out! Big Bro’s coming! Jez Alborough
Terror spreads through the jungle as animals hear the news that rough, tough Big Bro is coming. A crew of animals learns that size is relative.
Who sank the boat? Pamela Allen
The reader is invited to guess who causes the boat to sink when five animal friends of varying sizes decide to go for a row.
The bad-tempered ladybird Eric Carle
A grouchy ladybug, looking for a fight, challenges everyone she meets regardless of their size or strength. 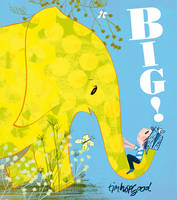 Big! Tim Hopgood
A little boy measures himself against his animal friends, but as he grows, his height changes too.
The blue balloon Mick Inkpen
A boy and his dog find a fantastic blue balloon that can be lots of different sizes.
Small, medium, large Emily Jenkins
This book is all about relative sizes. Not much narrative but lots of exciting size vocabulary.
Just teenie Susan Meddaugh
Justine is so small, everyone calls her Just Teenie, but one day she receives a plant that grows so tall, it gives her a different perspective. 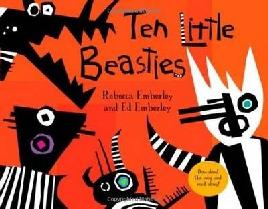 Ten little beasties Rebecca Emberley
Count up to ten as ten little beasties come to dance, and then subtract one at a time until there are zero monsters.
Wibbly Pig has 10 balloons Mick Inkpen
Wibbly Pig has ten balloons and one by one he gives them away until he is left with a difficult choice over the last one.
One less fish Kim Michelle Toft
Learn about the endangered fish on the Great Barrier Reef as they count down from twelve to zero.

While you are sleeping Durga Bernhard
A lift-the-flap book that deals with the fact that it is a different time of day all over the world.
The bad-tempered ladybird Eric Carle
A grouchy ladybug, looking for a fight, challenges everyone she meets regardless of their size or strength. 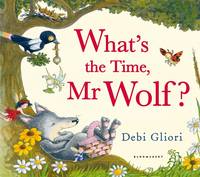 What’s the time, Mr Wolf? Debi Gliori
Follow Mr. Wolf throughout his day as he encounters familiar fairy tale characters. A clock shows the different times depicted.
Cluck o’clock Kes Gray
A group of chickens has a full day on the farm, from eating breakfast early in the morning to avoiding a fox late at night.
A second is a hiccup Hazel Hutchins
Explains units of time in imaginative terms children can understand: a second lasts as long as a hiccup; a week is seven sleeps; and a year is the time it takes to grown into new shoes.
Just a second Steve Jenkins
What can happen in just a second, a minute, or an hour? How can we measure time? What exactly is time? In this title, the author brings forth different ways to think about time beyond the hands we see every day on a ticking clock.
Five minutes’ peace Jill Murphy
Mrs. Large tries to take a peaceful, relaxing bath but her family has other ideas.

Mr Archimedes’ bath Pamela Allen
Mr Archimedes hops in and out of a bath with, variously a kangaroo, goat and wombat, examining the water level each time, and trying to understand why when ALL the friends are in the bath it always overflows. 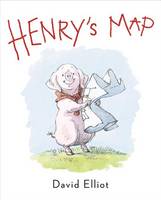 Henry’s map David Elliot
Henry makes a map to identify where everything belongs on the farm, but he learns that making a map isn’t as simple as he may think.
The Hueys in none the number Oliver Jeffers
One of the Hueys tries to explain the concept of "none" to another by finding different numbers of items, one through ten, then taking them all away
Nesta and the missing zero Julie Leibrich
Mr Abacus has lost the number zero and it’s amazing how much chaos nothing can cause!
Eat your math homework Ann McCallum
This clever book introduces math concepts such as Fibonacci numbers, fractions, tessellations, tangrams, and variables - with recipes!
Math curse Jon Scieszka
When the teacher tells her class that they can think of almost everything as a math problem, one student acquires a math anxiety which becomes a real curse.
City numbers Joanne Schwartz
Photographs of numbers in an urban setting. Includes decimals, fractions and percentages. A good starter for discussion.