Tūranga opened Friday 12 October 2018 at 1pm.
Visitors enter Tūranga in Cathedral Square through a large welcoming foyer designed to be an extension of the public open space of the square.

This ground floor “urban carpet” acts as a link to the neighbouring Performing Arts Precinct and Convention Centre, with a cafe and an area displaying new technology.
The first floor has a 200-seat community arena, exhibition space, and areas for families, children and youth.
The top three floors house the bulk of the library’s digital, specialist and print collections along with meeting, recreation and activity areas.

Listen to an audio tour of Tūranga about the building's cultural narrative with Joseph Hullen, Matapopore trustee.

The design was developed in discussion with Ngāi Tahu and the Ngāi Tūāhuriri rūnanga. Terraces and openings on upper floors face culturally significant points in the Canterbury landscape and beyond:

The golden aluminium facade, or veils, on the building reflect the folded nature of the nearby Port Hills with their warm colours and shadows. It also echoes the triangular leaves of the native harakeke flax which originally grew in swamps around the site.

Lewis Bradford Consulting Engineers Ltd was the structural engineering firm on the Tūranga project. The structure consists of large post-tensioned concrete walls with viscous dampers to provide a low damage structural system along with a steel moment resisting frame structure to the perimeter. T

Find out more about the structural engineering of Tūranga. 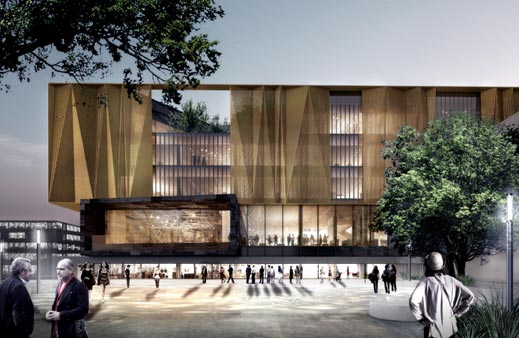 schmidt hammer lassen has received more than 150 awards for its work, which includes 12 libraries internationally, the International Criminal Court in The Hague and the  ARoS Museum of Art in Denmark

Not everyone is comfortable walking into new buildings or experiences and that’s why it was really important to make it inviting. The ground floor is essentially a public space – an extension of Cathedral Square - and we want people to feel like they belong here. Once they’re in the building we want to make access to knowledge as easy as possible.

Libraries have moved on from being repositories of books to being multi-media hubs and social hubs. The modern library is the ‘third space’ between home and work. It’s a place where you can meet people or be ‘alone together,’ enjoying sharing a social and recreational space with others, even if you are not engaging directly with them.

At night the library becomes a lantern that lights up Cathedral Square, a beacon that draws people across the square.