Christchurch's Tūranga is a library 'that rocks' on the world stage Vicki Anderson, Stuff, 28 December 2019

12 November - Statistics from the opening month

Mōrena. The day has finally arrived and we hope you're as excited as we are for the Tūranga Grand Opening! Watch the official opening ceremony online from 12 noon today https://www.youtube.com/watch?v=aivupywQ9ccDoors open to the public for tours at 1pm. More about Tūranga: https://my.christchurchcitylibraries.com/turanga/

Christchurch’s new city library is more than just books! Take a look inside & share another positive milestone in the rebuild of the city! @Christchurch_NZ @ChristchurchCC #christchurch @NewstalkZB pic.twitter.com/mPXo8umrNJ

A few images of our nearly completed central city library, Tūranga, by night ?Tūranga is officially opening to the...

Posted by ChristchurchNZ on Monday, October 8, 2018

Turanga partnership a win for LEGO lovers Newsline, 10 September 2018
Turanga and Imagination Station have joined creative forces to make LEGO playtime a permanent fixture in the city’s new central library. The Christchurch City Council has entered into a formal partnership with the charitable trust, which specialises in creative play and creative education using LEGO. Imagination Station will have a new permanent home on Turanga’s Hapori/Community Floor (level one) when the library opens on 12 October. Its current site in Cathedral Junction will close after 11 October. Find out more on Newsline.

Tūranga by night. If you are in town for #wordchch, that gorgeous building on the corner of Colombo and Gloucester is opening on Friday 12 October. https://t.co/tp8vILPUbC ^DR pic.twitter.com/GzqcLd5uPu

Pipes! Inception-like views! And more stunning perspectives! The Latest pics of Tūranga have something for everyone. https://t.co/xUZD68AFZi pic.twitter.com/daH003ENwK

Photos from this week on site at Tūranga show the beginnings of some colour schemes, in particular, the world's most orange bathroom. ^MThttps://t.co/xUZD68AFZi

People are being urged to join the library before the doors slide open to reveal Christchurch’s most modern and multi-use “community hub”, Tūranga.

Innovative Tūranga in Cathedral Square will be the largest public library in the South Island, connecting five floors of knowledge, products, services and experiences. It is due to open later this year.

“It’s free for Christchurch residents to join our city libraries, which all offer a range of valuable resources. You can do so online or simply fill out a membership form at any local library,” Ms Robertson says. Read more.

Migration stories and the currents that bring people to new countries feature in a large-scale artwork adorning the new central library.

Local Māori artists Morgan Mathews-Hale and Riki Manuel have collaborated on the design which has been painstakingly sand blasted by hand at local studio Art Fetiche Studio into bluestone tiles that make up a 38-metre outer wall of Tūranga. Read more.

All this technology under one roof. This article was published in uncover- huraina issue 8, June to August 2018

Tūranga to cater for foodies, coffee lovers [Newsline article 18 May 2018]

Food lovers and coffee connoisseurs are in for a treat when Christchurch’s new central library, Tūranga, opens its doors later this year. The $92 million public library – set to become the most modern in the southern hemisphere – will feature an array of high-tech learning experiences, as well as a new café and espresso bar split between its ground and first floors. The venues, both called Foundation, will be jointly operated by The Catering Belle owner Ruth Trevella and current part-owner of Linwood’s Under the Red Veranda Amanda Heasley. Read more. 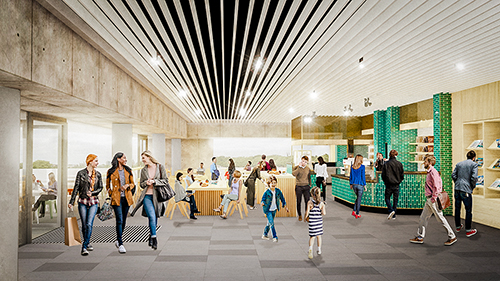 A library but not as we know it Carolyn Robertson, Head of Libraries and Information, Christchurch City Council. This article was published in uncover- huraina issue 7, March to May 2018

Spark signs on as library, knowledge centre partner Newsline, 9 May

First concrete pour for what will not only be CHCHs Central Library, but a 21st century knowledge centre!
READ MORE: https://t.co/SU2YLSAL9N pic.twitter.com/bxDmcWLQIO

The oversized astro turf lounge suite has moved from Gloucester St. Now on the north east side of Cathedral Square! pic.twitter.com/APnlgjZ8M1

The site for the New Central Library was cleared. Here are some photos of progress of the demolition of the Camelot Hotel.

New Central Library in the news